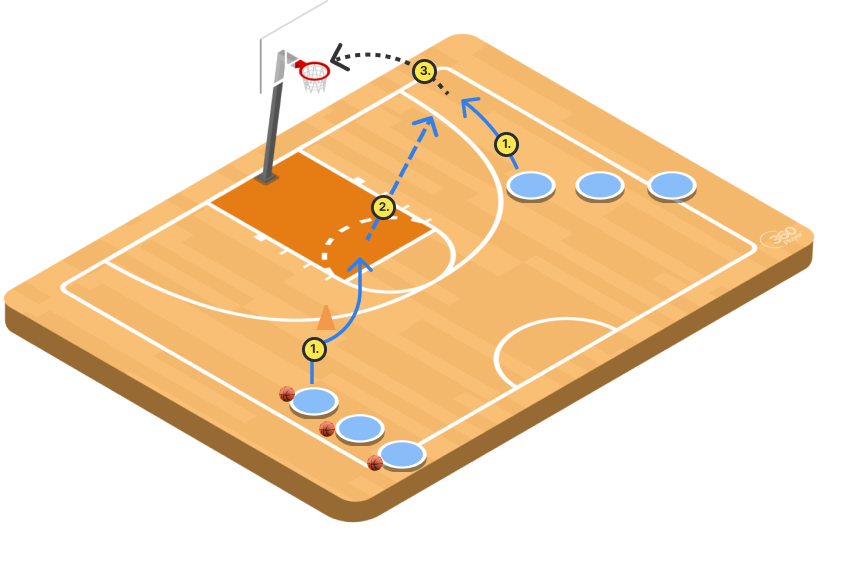 The Drive & Kick to Corner drill gets players attacking downhill off screens and reacting quickly to open teammates. This is a great drill to practice key offensive principles at every level.

Start with one line on each side: one about halfway between the perimeter and half-court and the other on the opposite wing. Have two or three balls in the high line. Set up a cone or mannequin (or have a coach standing) a few feet inside of the high line to represent a screener.

The first player in the high line makes a move and attacks the screen. This player should run tight off the screen and immediately attack downhill toward the rim. As the ball-carrier comes off the screen, the opposite player relocates to the corner. As soon as the player reaches the corner, the ball-carrier throws a quick chest pass for a catch and shoot. The passer then goes to the back of the shooting line and the shooter retrieves his/her own rebound and switches to the passing line.

-Timing is everything. Shooters should not begin to relocate until the ball-carrier has come off the screen and shown a commitment to drive downhill. Passers need to hit their teammates as they reach the corner. Forcing them to wait will allow their defenders to recover.

-Coaches may run this drill for a specific time period or up to a set score. Make sure to work both sides of the floor.