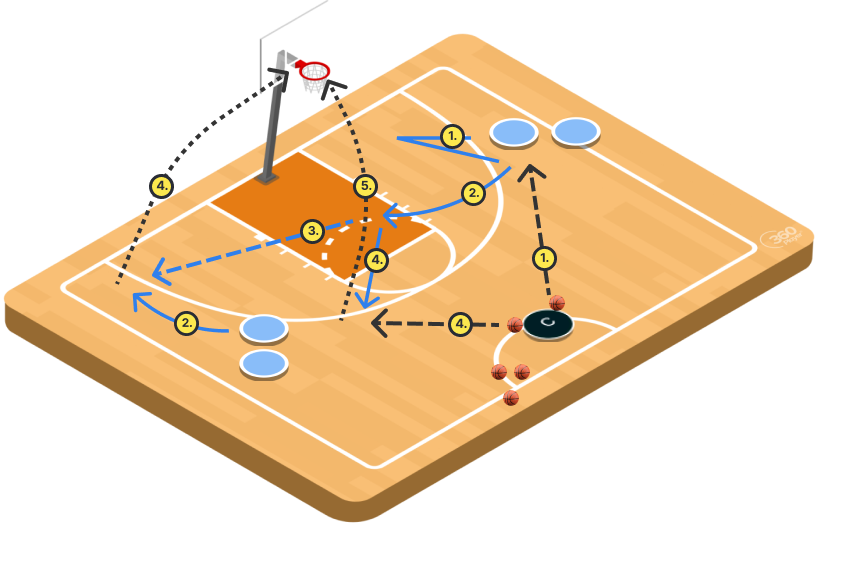 This drill was taken from a Duke University practice session. The ability to drive and kick is a staple of any successful offense. The Duke Drive & Kick drill forces players to move without the ball, attack the lane off the catch, and gets them plenty of game-like shot repetitions.

Start with one line on each wing, outside of the perimeter, and a coach near the top of the key. Coach will need two basketballs for every repetition, as both players will get a shot, so have a large supply available nearby to assure the drill moves quickly.

The first player in each line will “V” cut to get open. Coach can pass to either side. The receiver quickly squares up to the rim, rips middle, and attacks the lane. As the ball-carrier attacks, the player in the opposite line must relocate to either the corner or the top of the key. Once the ball-carrier has established two feet inside the paint, he/she throws a quick pass to the other player for a catch and shoot. Upon throwing the pass, the first player must pop out to an open spot on the perimeter and receive another pass from the coach for his/her own catch and shoot. Players should retrieve their own rebounds, return the balls to the coach, and switch lines after every repetition.

-Coaches can throw initial pass to the same side every time if preferred. If doing so, they should switch halfway through to assure players are attacking from both wings.

-The attackers may also work on quick jabs to the outside or dribble moves before attacking the lane. Coaches can dictate how players attack based on the team’s skill and needs.