If you had been watching the Bundesliga in November of 2019, things weren’t looking all too great for Bayern. At this time, they sat in fourth place in the German league while having just suffered a 5-1 defeat at the hands of Eintracht Frankfurt. At this time, it would be hard for anyone to predict that 9 months later they’d not only win the German league and cup, but also be crowned champions of Europe in dominating fashion!

One of the key changes in Bayern’s turn around was a change at the top. Shortly after their dreadful 5-1 defeat Bayern’s boss Nico Kovac was sacked, and the team was put under the temporary command of Hansi Flick. Many were weary as Flick hadn’t held a head coaching position since 2005, not to mention never in a top flight league. However, he was second in command of the German national team when they went on to win the World Cup in 2014 and he came highly recommended from those who knew him.

Well it didn’t take long for Flick to turn his interim caretaker position into a full-time head coach position as the results within the Bayern team began to change on a dime. He swiftly won over the Bayern faithful, implemented his vision, and transformed Bayern into one of the most fearful sides in Europe once again. So what were the tactics and philosophies used by Flick to turn things around at Bayern? In this article we will dive in deep and take a look.

One of the first noticeable differences under Flick’s new direction was improvements to Bayern’s build up play and control of midfield. Under stiff competition, Kovac’s teams struggled to consistently and securely bring the ball up the pitch. Flick immediately placed an emphasis on having numerical superiority while building from the back, drawing influence from Pep Guardiola who had been coaching many of the current Bayern players just a few years before. To do this the outside backs push up and give width to stretch out the defense, meanwhile the defensive midfielders come down to help bring the ball up. In this diagram you can see Kimmich drops between the center backs to help distribute the ball. Thiago also comes down to support the play. 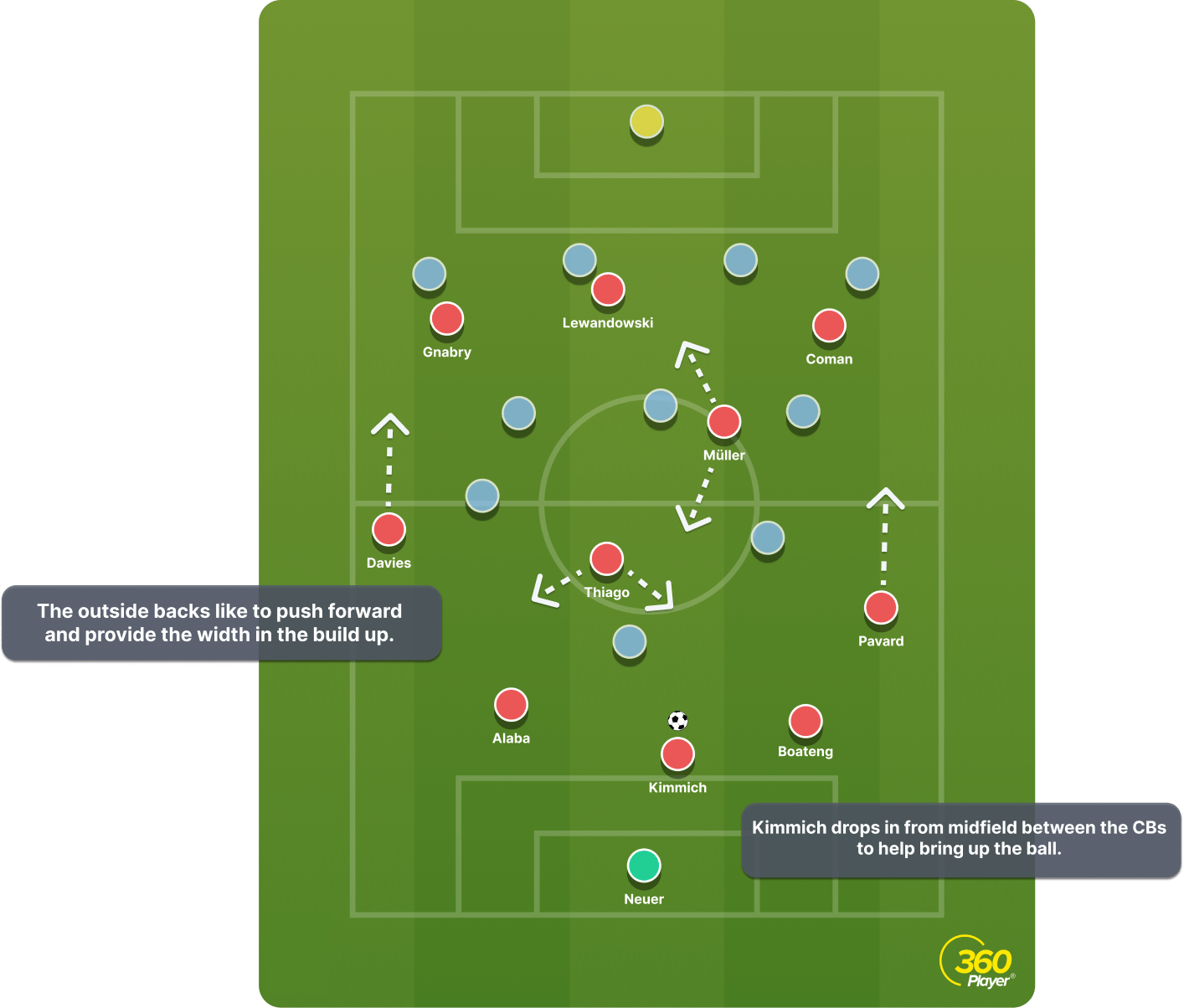 Kimmich and Thiago are both creative and technical players and using their skills further back really helps Bayern to securely move the ball forward.

A few other things to notice, Flick opts to use David Alaba at center back who is an excellent technical player and gifted passer of the ball. In addition, at goal keeper, Neuer is a great asset in helping build out of the back with his superior distribution skills.

2. Attacking Over The Wings

In addition to stronger build up play, another area where Bayern have improved is attacking down the wings. Under Kovac, Bayern’s attack often times resembled a ‘U’ shape where the defending team could pack the center of the pitch and Bayern could struggle to work the ball in to the middle.

Through the use of athletic fullbacks such as Davies and Pavard, this all changed under Flick. By getting the outside backs involved and providing the width in attack, this allows the wingers to come closer into the middle and create overloads in the center.

Another tactic that Flick uses to create space on one side is to begin the play on one side of the field and gradually draw the opposition to shift to the ball side. Once they’ve done this, Bayern quickly switch the field to the opposite side giving their athletic fullbacks and attackers space to work with. 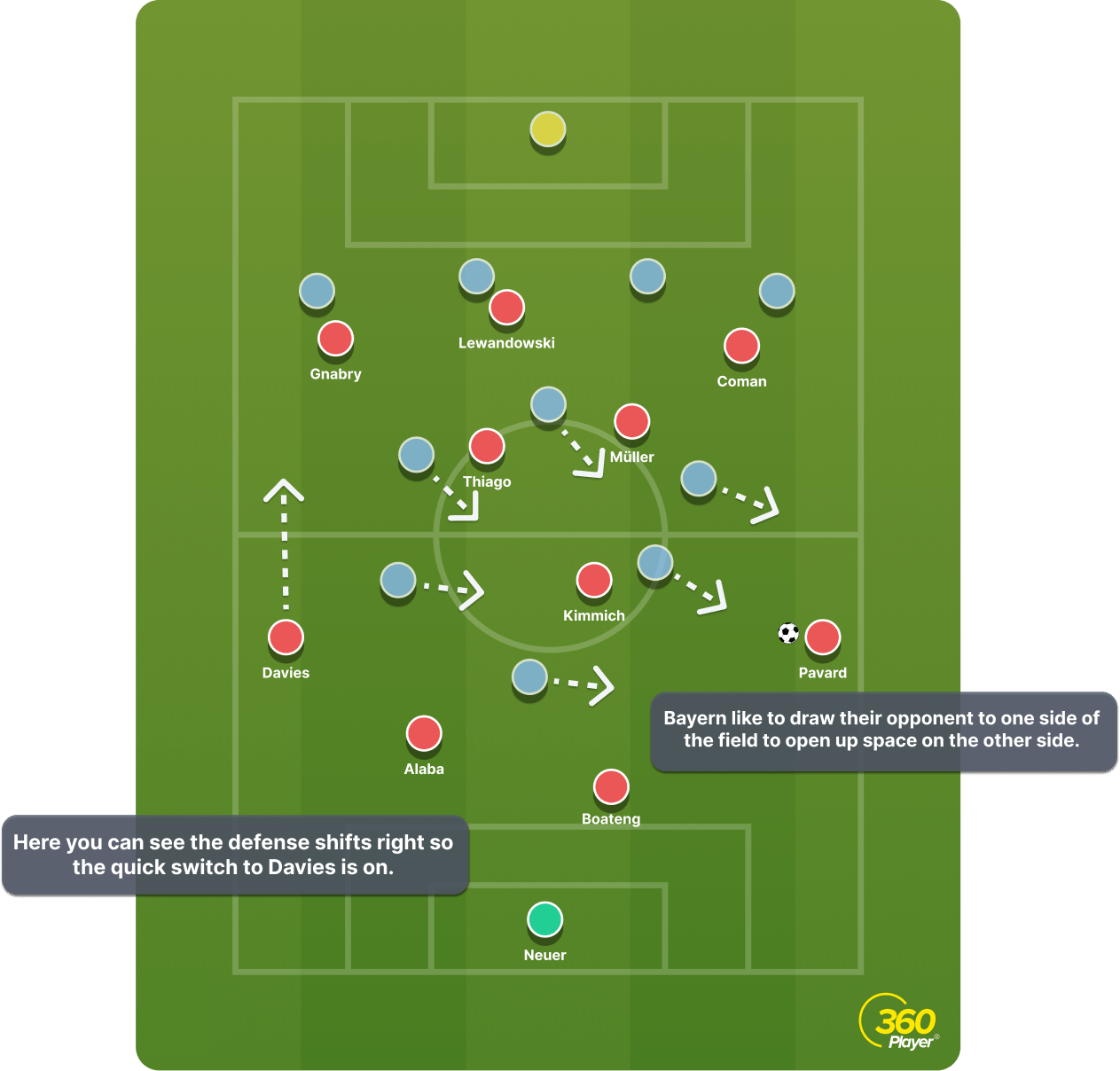 Once Bayern have worked the ball all the way up the pitch they’re able to storm the box with excellent aerial players such as Lewandowski and Müller. 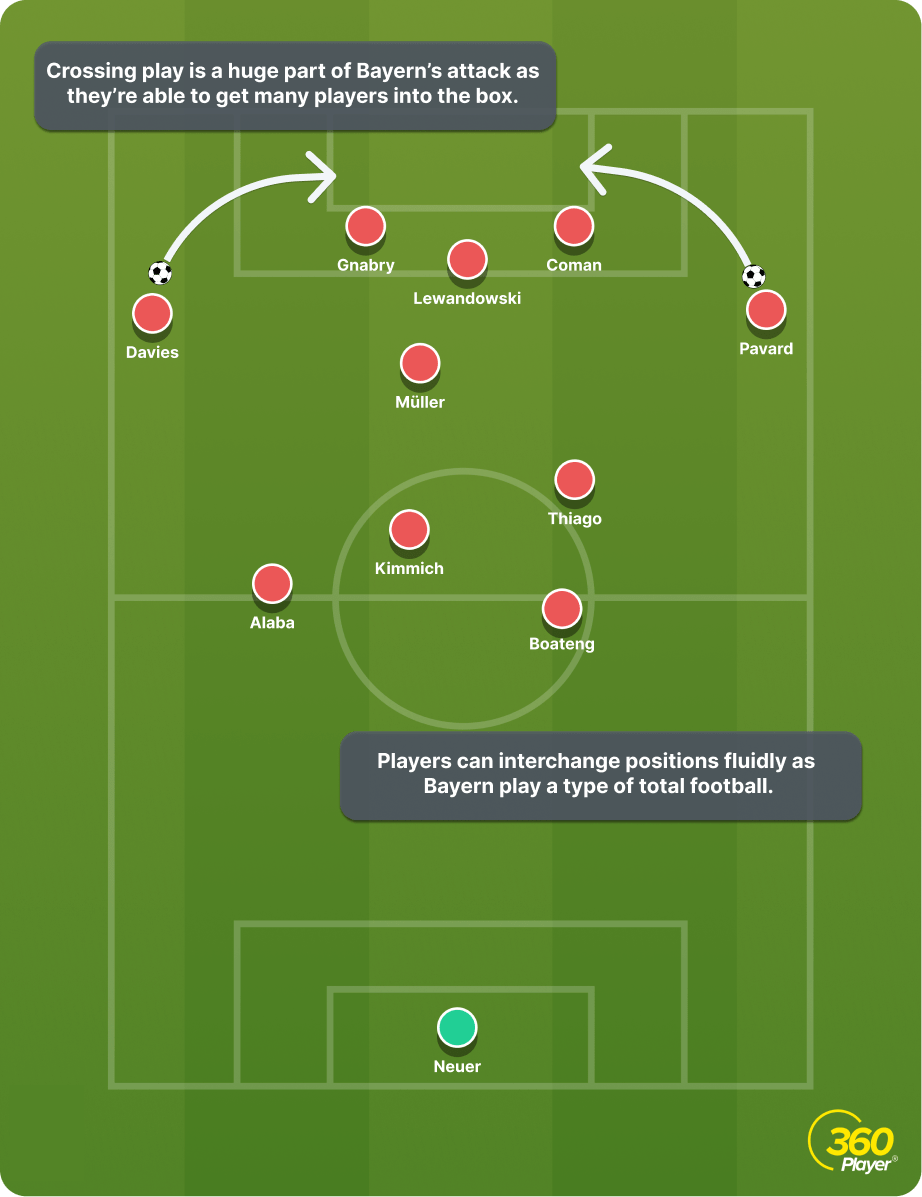 Another aspect that is worth mentioning is that Bayern players are comfortable changing positions seamlessly in attack which can make them much harder to defend for the opposition.

While there’s no doubt build up play is important, many of Bayern’s best goal scoring chances come from winning the ball quickly from their opponents. In fact, in Bayern’s 8-2 demolition of Barcelona, 3 out of their first 4 goals came within 10 seconds after regaining possession. Since Flick likes to keep passing lanes short players are much closer to the ball when it’s lost versus when they were dispossessed when Kovac was the head man.

When you combine the short distances players need to cover to apply pressure with Bayern’s top class athleticism, it’s a perfect recipe for effective Gegenpressing.

Bayern are not only able to press after the ball is lost, they are able to dominantly assert their pressing strategy in almost all situations. While Kovac’s Bayern were more content to sit back, Flick has instilled a much more aggressive high pressing strategy. In the 2019/20 season Bayern were the most effective pressing team in all of Europe, winning the ball a staggering 34.7% of the time.

With such a fast group of defenders, Bayern aren’t afraid to hold their defensive line very high and try to suffocate opponents in their own half. Through applying lots of pressure Bayern can often times force their opponents to make bad passes or other mistakes. If their opponent tries to play long, it’s usually no problem for Bayern’s speedy defenders and if needed, Neuer is always at the ready and can quickly come off his line. 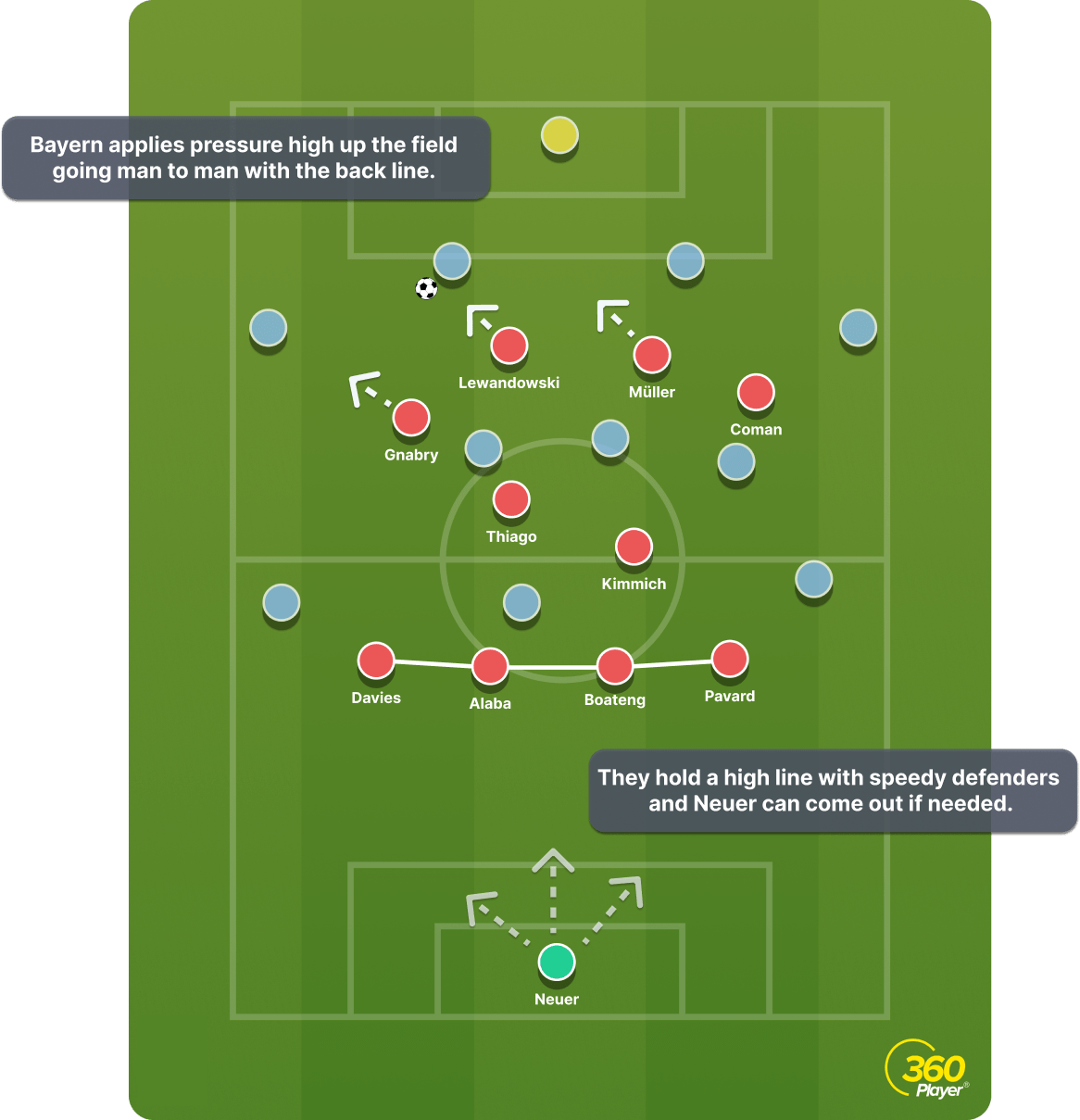 One mentality that is seen throughout the Bayern players is their emphasis on working together as a team. For example, when asked how they would defend against world class players like Messi, Neymar, and Mbappe, most shrugged it off as being no problem. Simply put, if one player gets beat, it just comes to the next man up, and the next man after that. Bayern swarm the ball as a unit and players very rarely are left to deal with attackers all on their own. If an attacker does manage to break through the lines, the next defensive player works to delay the attacker while their teammates tirelessly work to get back and help.

Bayern have many different mechanisms and methods of pressing the ball from open play. In one variation the wingers stay inside and they compact the middle making it difficult for their opponents to switch the field. 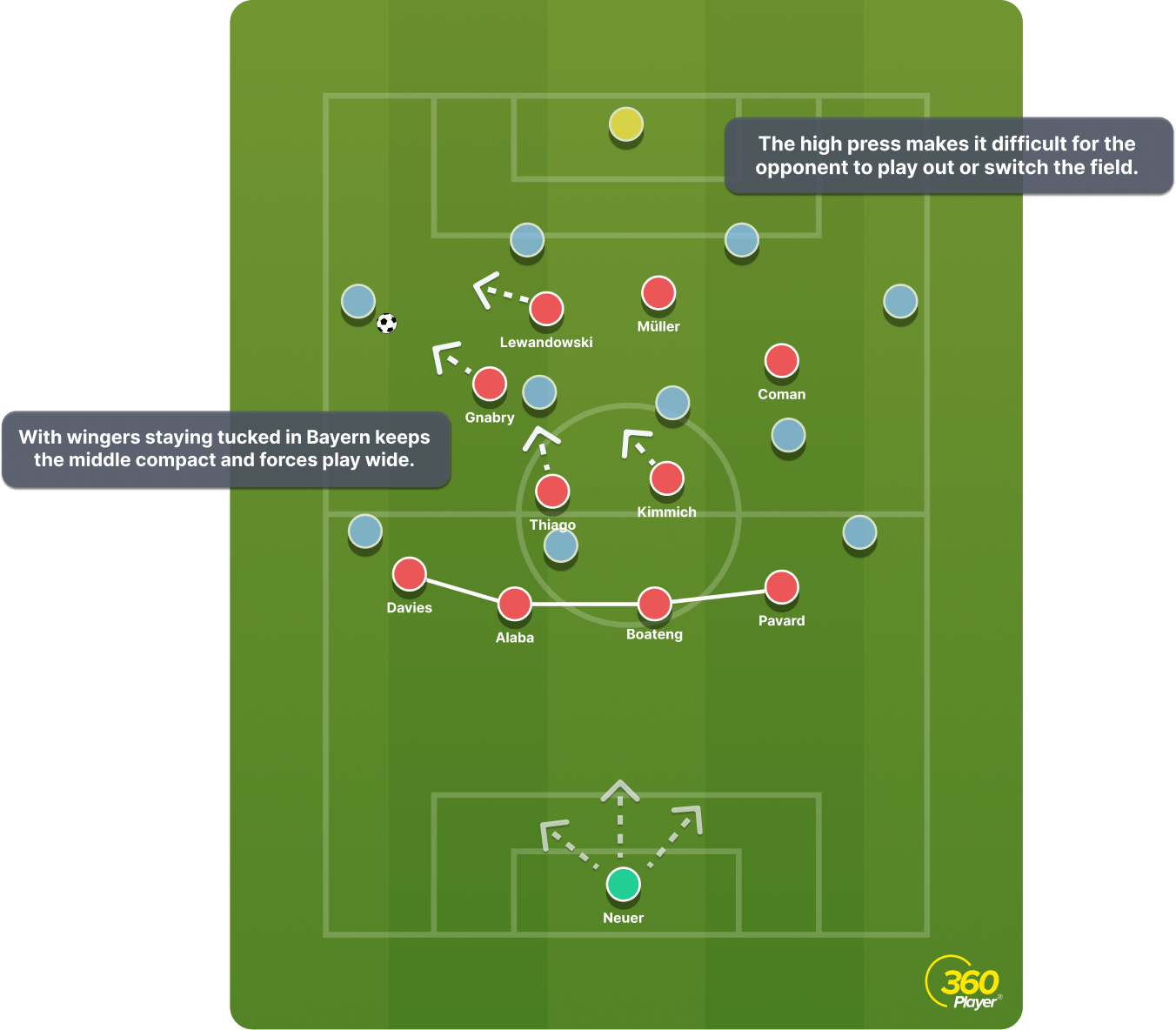 Other variations can include pressing with the fullbacks where the positional awareness of one of the defensive midfielders helps to cover and keep balance. Or sometimes the wingers will come and press the center backs where Lewadowski drops down to mark a midfielder and the rest of the Bayern midfield swarms to whichever side the ball goes.

Whichever pressing technique is used, Bayern love to apply loads of pressure to opponents in their own half and by going almost man to man so high up the pitch, they are able to assert their dominance and leave their mark on the game.

5. Scoring On The Counter Attack

When applying so much pressure to opponents, it’s easy to see how Bayern often win the ball in some pretty dangerous areas. One of the benefits of having so many players high up the field defensively is that as soon as the ball is won, they’ve got so many players forward that it makes the transition from defense to attack lightning fast. Speedy wingers like Coman and Gnabry can get in behind defenses quickly and if the ball must be played out wide, there’s enough Bayern players that are great in the air to finish off the crosses.

If you’d like to improve your teams counter attacking speed, check out this drill, win the ball to counter. You can also see tons more great drills in the 360Player app!

In this exercise the counter attacking team should apply relentless pressure and press the ball to create a chance going the other way. As soon as the ball is won, they need to quickly push numbers forward to try to capitalize on the opportunity.