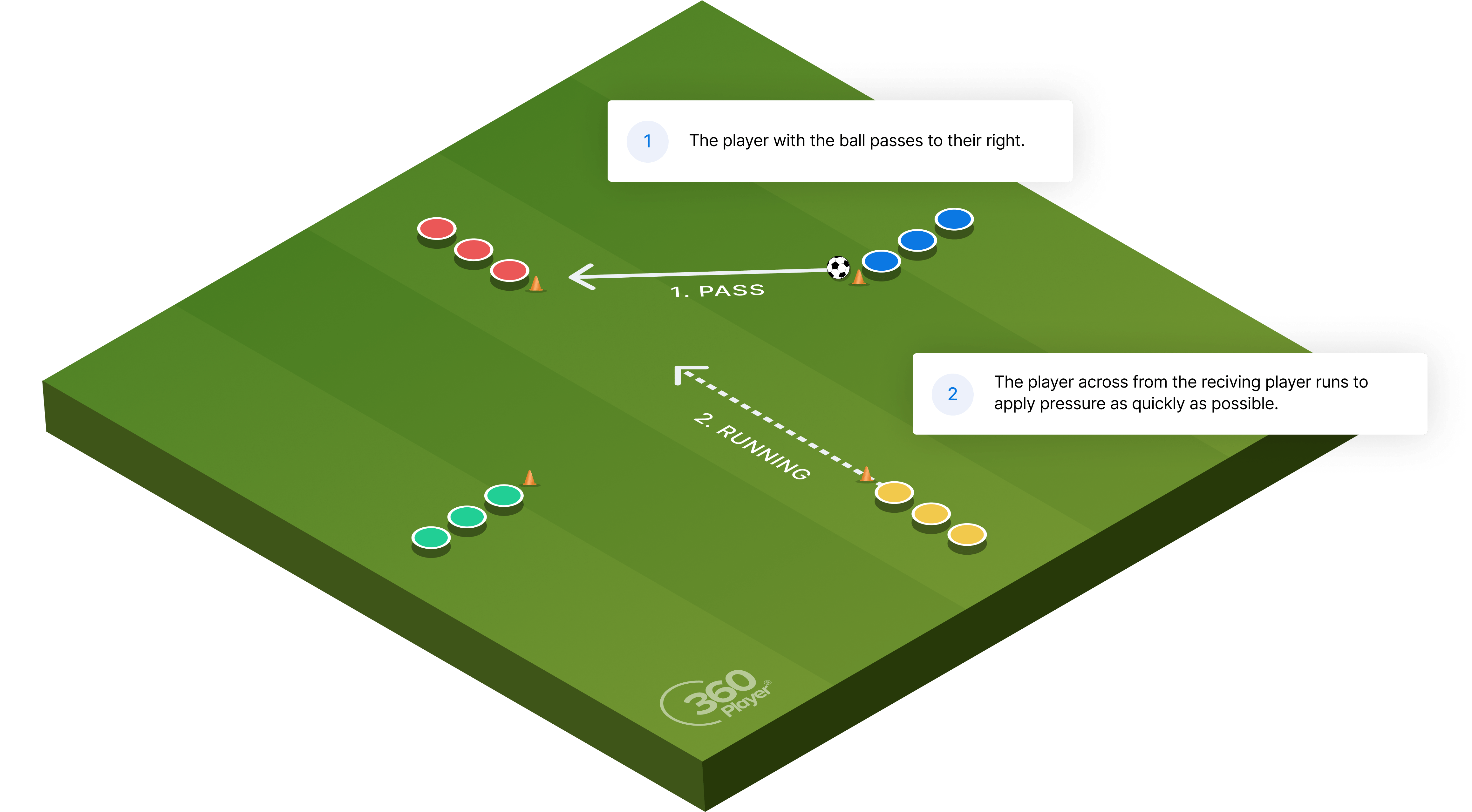 The Jürgen Klopp pressing warm-up is an excellent passing style warm-up that places an emphasis on defensive pressure and closing down the space quickly. Klopp’s teams are often known for employing gegenpressing tactics where they try to win the ball back the moment possession is lost by swarming the opposing ball carrier. In this warm-up, players will get the chance to practice closing down the space of their opponent quickly while at the same time getting plenty of touches on the ball.

Preparations for this drill are relatively simple. Essentially create a square with 4 cones around 8-10 meters apart. The ideal distance between cones may vary depending on age and skill level. Keep in mind that the cones need to be close enough together that a player standing at a cone on one side can run across to apply pressure relatively quickly, but not too close that the player in possession doesn’t have enough time to receive a pass.

Once you’ve built the square, divide players evenly in lines behind each cone. Keep in mind that if you’re doing this exercise with a large number of players, it may be best to build two or three squares so that players don’t have to wait in long lines. As a rule of thumb, if there are more than three players in a line it may be best to build an additional grid. Each square needs one ball.

One line starts with the ball and passes to the first player in the line to their right. As soon as the pass has been made, the first player in the line opposite the receiving player runs towards them and tries to apply pressure. Once the receiving player collects the ball, they continue by passing to the player to their right and the cycle continues.

Once the defending player has made it to the opposite side, they head to the back of the line on that side.

Because a lot of players will be running through the middle of the square, it’s important for players to watch where they are going to avoid collisions. In addition, players may want to pass around the square quickly with one touch. If the square is on the larger side, the coach should encourage the players to play with a minimum of two touches so that the defender has a chance to work on closing the space quickly. Another variation could be played by using a smaller square and playing with one touch rather than two.

This drill offers a chance for players to work on proper passing and receiving fundamentals. Encourage players to use the inside of their feet to pass and trap. Additionally, coaches can put stipulations on players such as ‘right foot only’ or ‘left foot only’ to mix things up.

The defensive players can work on approaching the opposition quickly and with correct positioning. Ideally the defensive players should approach from one side to force the attacker in one direction. If a defender manages to close off a passing lane, the receiving player may want to move a few meters to open up an angle for the passer.